Troop 100 is non-denominational and welcomes all boys. Find more about Troop 100 at https://www.facebook.com/CenturyTroop/

Troop 100, "The Century Troop," was chartered on February 1, 1918, only eight years after Scouting was introduced to the United States. Troop 100 is the oldest Boy Scout Troop in our Nation’s Capital and one of the oldest in the nation.

Its’ goal is to teach boys leadership and environmental awareness through outdoor camping activities and community service.

Like many Scout Troops, Troop 100 uses the "Patrol Method of Scouting. It was Lord Baden Powell,

the founder of the Scouting movement, who said "the patrol method is the only method. Our observation over the years has shown us that Baden Powell was correct. The Patrol method allows boys to develop leadership skills by working together as a Patrol. Scouts learn to work as a team and understand first-hand how their participation affects others.

The original patrols of the Troop were the Stags, Pine Trees, Foxes and Beavers. These Patrols have continued for more than 90 years. The patrols of Troop 100 have also participated in 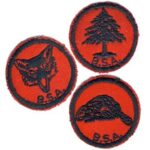 Camping is an integral part of our program, and in addition to 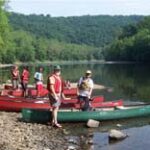 camping every month and attending summer camp each summer, our Scouts have also taken part in treks covering as many as 7,000 miles. We have visited most of the lower 48 states, plus Canada and Mexico.

The Troop colors of navy blue and grey were adopted by Troop vote at the second Troop meeting, February 8, 1918. The Council Fire, our yearbook, was originally published as a weekly newsletter but evolved into an annual production. The first issue of The Council Fire appeared on October 14, 1921.

It is now the oldest Scouting publication in the area. In November, 1961 Troop 100 moved to River Road Presbyterian Church, and in October, 1984, Cub Scout Pack 100 was organized. After 41 years at River Road we moved to our present location at Saint Ann’s Catholic Church. We are grateful to the church and its members for the use of the Scout Meeting Room and other support they give us throughout the year.